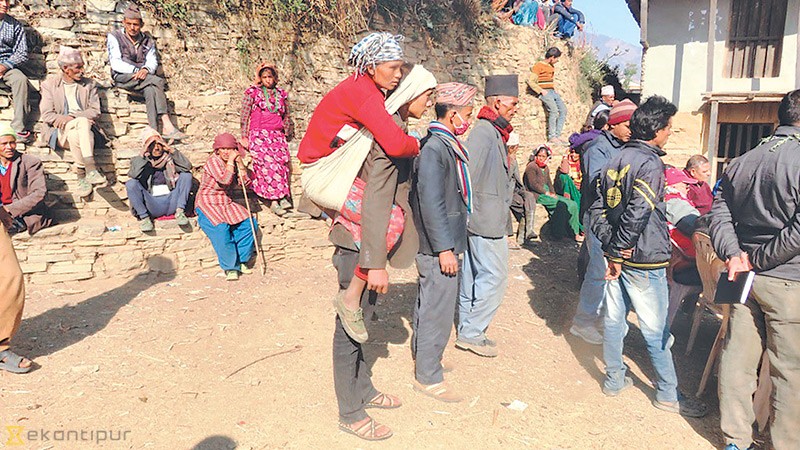 Jan 14, 2018-
Even as 13 people have died in Jajarkot in the past week from cold-related ailments, the Health Ministry has ruled out a disease outbreak in the district.

Following a visit by the health secretary and senior officials, the ministry on Saturday said there was no outbreak of influenza.

“We conducted tests on five patients who were thought to be severely affected. Only one was found to be suffering from viral influenza,” said Dr Bhim Acharya, director of the Epidemiology and Disease Control Division.

The EDCD is responsible for dealing with any sort of epidemic across the country. “We can say with confidence that there is no outbreak of disease in this district. The case of a single patient cannot be generalised.”

Dr Acharya said many people tend to blame even routine deaths on influenza. “The reported deaths are routine cases caused either by old age or chronic diseases,” said Dr Acharya.

Junichande in the district was the worst affected. Around 2,000 people were reported to have taken ill in the past week. As many as 100 patients with viral fever were said to be visiting health posts on a daily basis. Patients complained of fever, joint pain and vomiting.

Viral fever was suspected in Junichande, Kapra, Badkule, Karki Gaun, Majkot, Alimaugana, Dandakot and Parale villages. Jajarkot has been vulnerable to disease outbreaks in the past. In the worst case ever of epidemic outbreak, around 350 people died of cholera in 2009. In 2015, more than 20 people were said to have died from influenza.

A team led by him visited the district on Saturday. The team included former health minister Shakti Basnet and director general of the Department of Health Services Dr Rajendra Pant.

After reports of a disease outbreak, a team from the Karnali Institute of Health Sciences has been running health camps in the affected districts. Doctors involved in treatment said a majority of the people visiting the camps have common cold and fever. “The flow of patients has declined,” said Ram Bahadur Nepali, chief of the Jajarkot district public health office.